Just off Daisy's Gardens, shopkeeper Toons have been taken prisoner and are being held under lock and key by the Sellbots! Only the bravest of Toons will be able to come to their rescue -- Cogs, Skelecogs, and Goons are around every corner, and the Sellbot Vice President himself lies in wait in his office at the top of Sellbot Towers. To enter Sellbot Towers, you'll need two things: Cog Disguise and enough Sellbot merit points to earn a promotion.

The Toon Council has decreed that Toons should proceed with the utmost caution while invading Sellbot HQ. Therefore, the following elevator minimum Laff point requirements have been instituted to ensure the general safety of the Toon population:

Once you've completed your Sellbot Disguise, a new meter for Sellbot Merits will appear on your Gag training panel at the end of each Cog battle. Every time you defeat a Sellbot, the Merit meter will be added to. When you have defeated enough Sellbots to earn a promotion, the meter will be full and will read "Ready for Promotion". This means you're ready to enter Sellbot Towers and face the V.P.! Up to five Laff Points can be earned with Sellbot promotions.

You'll need to team up with three other Toons before entering the Sellbot Factory. Just like entering a Cog building, assemble with your fellow Toons outside the Factory and get on the elevator. It will take you to the main entrance. Stand on the switch to open the doors to the lobby. In the lobby you will find a Goon and three Cogs - defeat them to get access to the switch that opens the door to the hallway.

For advanced Toons only: There is a secret side elevator on the side of the Factory. This elevator takes you to the Duct Room instead of the Lobby.

Toon Tip: Goons can cause a Toon a lot of problems -- one hit from their eye beam will take 5 to 20 Laff points! To disable a Goon temporarily, jump on his head.

From the hallway you have three choices: straight ahead is the warehouse lookout, to the left is the boiler room, and to the right is the gear room. Take either the right or left path to get to the warehouse - there are three Cogs waiting in each location.

Toon Tip: Check the barrels scattered through the factory for gags. Touch them to replenish your supply!

For advanced Toons only: Try moving around crates and jumping on them to get at hard to reach places.

When you arrive at the warehouse, you'll need to sneak past the Goons and make your way up to the roof of the storeroom. Defeat the four Cogs here to get access to the switch that opens the door on the far side of the warehouse and use the other switches to activate the stompers. The stompers will get rid of the Goons on the main warehouse floor and clear the way for you.

Head through the door on the far side of the warehouse and use either elevator to go to the top of the silos. You'll need to defeat the Cogs on the east and west silos to open the doors. The switches inside these silos open the doors to the center silo, where you'll face four Cogs in a final battle - including the Factory Foreman. Defeating the Factory Foreman earns your Toon one piece of the Cog Disguise and gets you one step closer to entering Sellbot Towers! 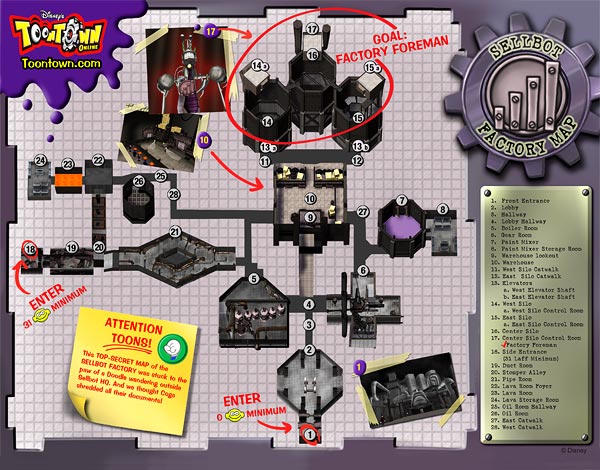 A Doodle who chewed the wires at Sellbot Towers was found with something stuck to his foot - a detailed Sellbot Factory map!

Once you've completed your Cog disguise and have earned enough Sellbot merits to be ready for a promotion, the doors to Sellbot Towers will open for you. Your Toon will automatically put on his or her Cog disguise as you walk through the door.

Assemble a group of eight Toons and get on the elevator -- it's time to face the Sellbot V.P. and rescue a shopkeeper!

The group of eight Toons will divide into two teams of four to face off against the V.P.'s Sellbot forces. Together the two teams will engage wave after wave of Cogs stored within the V.P.'s underbelly. Keep your wits about you and use all of the strategy you've developed battling Cogs on the streets of Toontown! You'll need to depend on teamwork -- this is the ultimate Toon-versus-Cog battle!

When the V.P.'s forces have been defeated, the remaining Toons will team up to fight the V.P. himself. Jump up to touch the bottom of the cage where the shopkeeper is being held -- this will stock you with a supply of cream pies you can throw at the V.P. To throw a pie, click on the pie icon at the top of your screen. If you are a PC user, you can also throw a pie by pressing INSERT on your keyboard. If you are a Mac user, you can also throw a pie by pressing FORWARD DELETE on your keyboard. While you hold the button down, you will see a power meter move left and right.

The V.P. will be doing his best to fight off the Toons around him. Keep moving around to avoid his attacks! Be sure that you jump as soon as you see or hear the V.P. jump, because any Toons standing on the ground when the V.P. lands will fall down and lose 10 Laff points.

Your goal is to drive the V.P all the way down the ramp and off the edge of the Cogs' launch pad. To do this, pelt him with pies in the face or on the chest. The V.P. is one super-tough Cog and most of the time pies don't affect him at all! In order to knock him back successfully, you'll have to wait until a Toon successfully tosses a pie into his undercarriage while the door is open. This will clog up his works and make the V.P. dizzy for a few seconds. While he's dizzy, pelt him with as many pies in the face and chest as you possibly can before he recovers himself and starts attacking Toons again!

If you're one of the Toons trying to gum up his undercarriage, watch carefully for the door in either the front or the back to swing open and try to throw a pie directly in. You can do this either from in front of the V.P. or behind him.

For Advanced Toons Only: A well-organized team of Toons should have at least one Toon on each side. Be careful and don't stand too close when the door opens -- streams of gears will fly out!

Toon Tip: If you see a fellow Toon whose Laff points are dangerously low, you can throw pies at that Toon to fill his or her Laff points back up. Keep watching out for the V.P.'s jump attack while you do this and be sure someone else is still keeping the V.P. on the defensive ... otherwise, he'll start to roll right back up the ramp!

SOS Toons - The Toons you rescue from the V.P. owe you a favor and are happy to repay you any time. Use the SOS button in your battle menu to call them into action.

back to top
Cashbot HQ