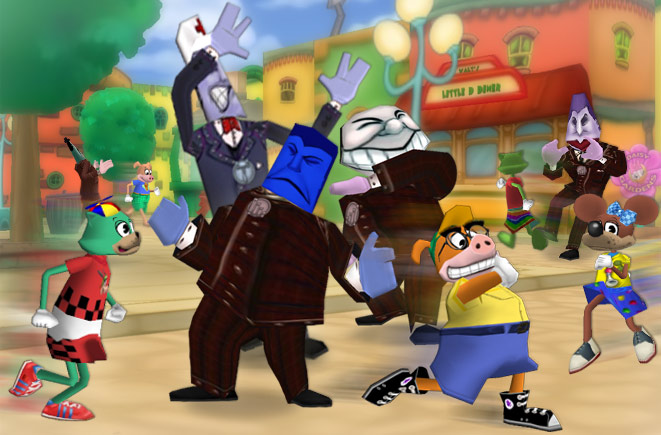 As April Toons speeds to a close today, the Silly Meter drops one more silly surprise with help from those inventive Toon Scientists.

While studying the Silly Meter's wild warping of weight during April Toons' Week, Toon Scientists tinkered with the goofy gravity in Toontown ever so slightly. The result?
From now on, all Toons run with a bit more zip!

Toons may need that extra speed soon, to dodge and evade grabby Cogs.
The Toon Resistance calculates that Cogs seem to be growing in numbers. Dash into Toontown now to speedily stock up on as many gags as you can this weekend...

Check out the new issue of Toon News... For the Amused! out today inside Toontown for all the dizzy details!

Posted on April 11, 2013 to: content
87 Comments
This thread is now closed for comments.

Woot, Thanks for the awesome update. Happy April Toons!

I love this, faster running is awesome!

Thanks for the update Toontown! :D I've really wanted to be able to run faster for a long time and now we can!

I Knew My Toon Was Running Faster! This is Great! i always thought toons could use some extra speed!

So THAT'S the silly surprise we were waiting for! Awesome! Now I can get to my locations faster, I can hurry up a bit while friends are waiting for me to join in with them in cog buildings, etc! Thanks, Toontown! :)

I love this SO much! I didn't notice until someone pointed it out. I said "We don't run faster!" and another toon said "Yes we do! Try it!", so sure enough I did and I said "Wow! This is BOSS!". Thanks Toontown!

I've been waiting for an update like this for ages. Thanks, Toon Council.

I Knew My Toon Was Running Faster! This is Great! i always thought toons could use some extra speed!

Thanks! So now when I'm running down the street I won't hit a cog on accident :)

Wow! Now toons can be better atheltes by running at a high speed!

nice thanks toontown we can get places faster and get away from cogs lol thanks :)

Ive been doing bldg after bldg im ready to defeat the cogs!

This is perfect for completing tedious tasks and running after fast-walking cogs. Thanks for this awesome update!

Yay, finally! A new update makes it to the open servers!

Awesome! I can now run from cogs AND get to buildings FASTER! :D

Oh, yes! This will help us defeat Mints and Factories faster! Thanks, Toon Council!

Toontastically runtastic! This update is definitely one of the best ones there could be in all of Toontown. Thanks, Toontown and the Toon Scientists! Toons of the World, Unite!!!

The toon resistance CALCULATES that cogs seem to be growing in NUMBERS? Looks like the work of a Number Cruncher to me!

Testtown had this update first. After having been on testtown where we could run faster, I logged on to toontown and noticed I was running at the same speed as I was. Only then did I know! Thanks, toontown!

Toontastic! we'll be Zooming those cogs cogs outta here in no time! And now i can run faster in tag with me doodle, lady, And those who play test, they haven't just added the M.A.P.S like in test! They now added the Speedy-toons! Thank-you toontown this will be a BLAST to toon headquaters!

Toontastic! Now I can run quicker to cog battles! I'll show 'em cogs how I roll!

Thanks guys! Now it doesn't take me so long to get to certain places, including the gag shop to get more gags to battle Cogs!

YAY! I LOVE RUNNING FASTER NOW! THANKS TOONTOWN! NOW I CAN DEFEAT THOSE COGS FASTER! TOONS OF THE WORLD UNITE!

If we run faster that will be useful! Really useful MUWAHAHAHA lol jk

I am zooming thanks to the silly meter! :-)

omg so cool im gonna try it out

Wow! And I thought April Toons' Week ended April 11th! This feature is amazing 'cause I love running fast. :)

Awesome! Now i can run faster on streets!

I think the words "calculates" and "numbers" hint to number crunchers invasions.

Great, thanks for this!

since im a bunny and bunny runs faster so now I AM FAST NOW THANK YOU! TOONS OF THE WORLD, UNITE!

Wow! All the toons might LOVE this update! Thank You!

Wow, this is very cool! Makes getting around much easier. Thanks Toontown!

Cool , and thanks! Now i can do missions faster as i can run fast!

Thanks, Toontown! I used to think about how slow the Toons were, (no offence) when going to cog buildings, but now, I'm so much faster! Thanks!!

So thats what we were waitin for! Cool! I love running faster for those fast walking cogs! Thanks ToonTown! Toons of the world Gag Up! For a fun-filled run to get those cogs! WOOHOO!

Thanks! THIS SO COOL

this is perfect! Toons can dash through Toontown in a flash! thanks!

This is so cool! I'll be zipping through my toontasks in seconds! Thanks so much, Toon Council!

GREAT! i have been waiting for this!

it help me deafeat the vp fast in my solo it was the fast won i done.

Wow! At least they are taking stuff from Test Toontown and putting onto LIVE Toontown. I mean seriously. It's been a YEAR since they put Test Toontown back online and has been going for a year now. Well, I think this is a very nice update to the game considering the extreme slowness that was before this update came onto the LIVE game. Well, thanks Toon Council for adding this from the Test Toontown and can't wait until the rest comes! Hopefully, something BIG and EXCITING will be added soon. :) ~ Prince Fireball Blue Mouse 79 Laff Points

Running this fast gives me a good burst of speed to get the cogs i need in seconds.

Faster Toons = easier ToonTasks and more gags. The more gags the easier to defeat Cogs. Thanks!!!!

I remember playing Toontown with my brothers, and i have a faint memory of getting from one place to another tool such a LONG time. Thank you Toon council! I love this game! >:3

Its great that there is another update to toontown:-). I love that we can run a little faster now. I somtimes even wish we could fly.That would be awsome! Go toontown! :-) .

wow! How did you guys find such good scientists?!?!?

Wow, thanks Toontown! This will make defeating cogs and running around toontown a lot easier now! Hope you had a great April Toons Week!

Thanks,that's why am running so fast then before.this makes it easy to catch up to bloodsucker battles!

I haven't played in a long time, but when I played today, I was like, whoa! Faster running! But I wanted to find out...... But my doubts were proved wrong! Toontown and Toontown Scientists, you guys are awesome!!!

Now those cogs will be deafeated and won't see me coming!

we run so fast

this acually matches my name,so all of toontown's speed goes with my name

Awesome easier to run through factories.

Thanks Toontown for the update. :D I can RUN FAST like the speed of light. LOL

Thank you so much Toontown! Now we can travel to places much faster than before! :)

Thanks ToonTown! Woohoo! Now I can defeat those cogs faster and/or catch up to them! Thanks Again!

This is sweet I am gonna run away from cogs faster on low gags and so get gags faster! Thanks so much Disney.

SWEET NOW I CAN CHASE THE VP FAST YAY

Faster Is Better And I Can Run So Fast A Cog Gets Dizzy! Its Funny When That Happens! Its Kind Of Werid When It Happens. So JUst Have Fun Zipping Around Toontown! Toons Of The World Unite!

Thank you Flippy! Now I can catch up with my toon friends!

I am so glad that toons can now run faster! I can finally catch up to fast cogs and stop the cogs from taking over toontown. Just to all the toons out there, Daisy's Garden needs some help. Cogs have just about changed every building into cogs places. Please help Daisy! I can not do it all by myself.

I love it! Now we could catch those pesky cogs faster...

Awesome! Now, I just have to get used to my new speed...

I could just dash to sellbot HQ everyday!

This is awesome! I can get where i need to go in half the time! Thanks Toon Council!